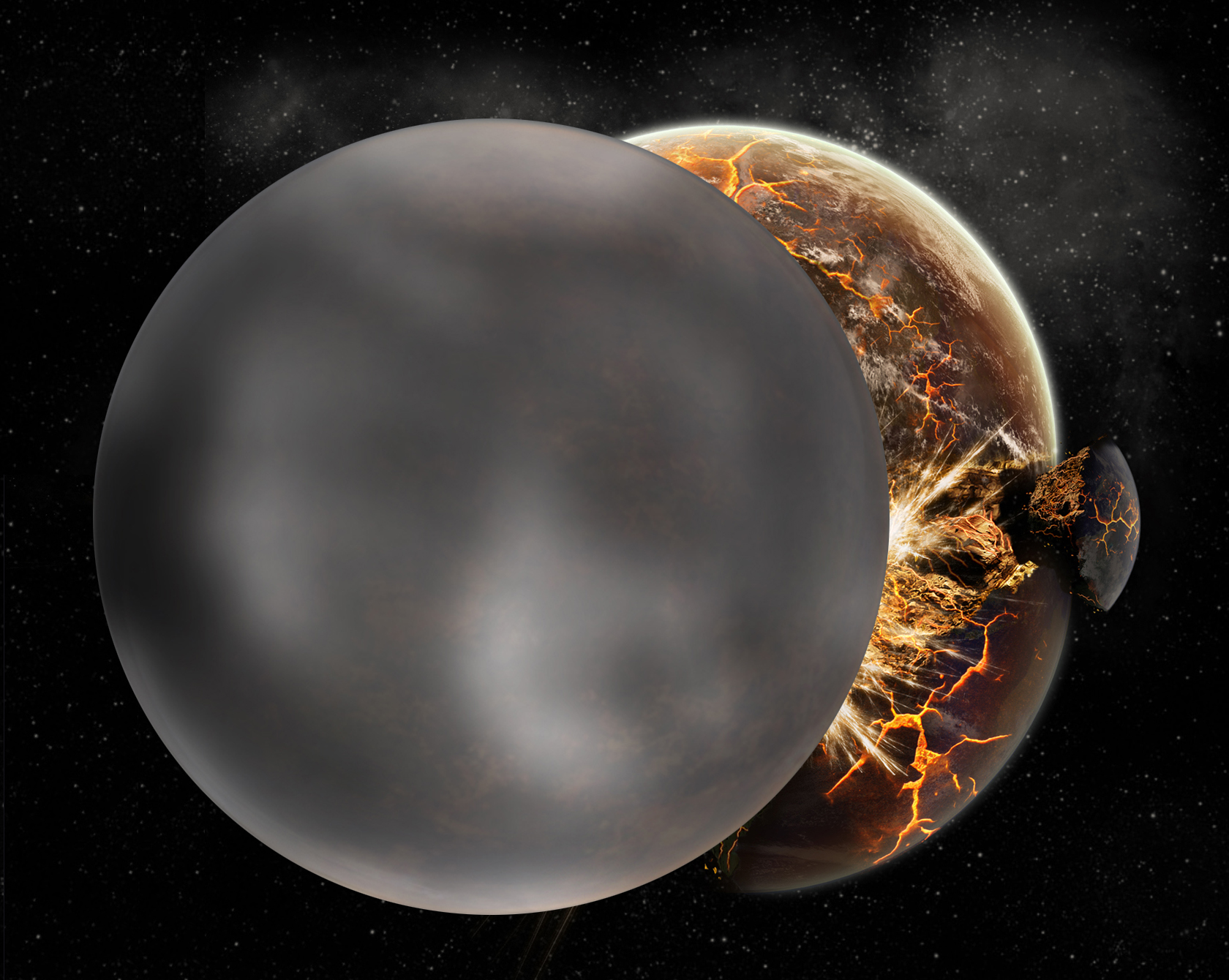 Unlike the standard model for how the Solar System formed, Mass Vortex Theory explains that planets form due to cyclonic-separation. Understanding this cyclonic separation method of planet formation is a prerequisite to understanding the Killer Crash.

The likely order in which protoplanets exited the gas flow of our Parent Vortex was: Jupiter, Neptune, Mercury, Venus, Uranus, Saturn, then Mars. This reasoning for this sequence takes into account the following factors:

At some point during this sequence of planets, another planet formed between Mars and Jupiter. We’ll call this planet Illo (this planet is indicated as the dark planet in the illustration above). It had an ice layer and at least two moons, maybe more.

When the next protoplanet exits after Mars, a planet forms; but, this newborn planet quickly crashes into Illo, while it is still very hot. The would-be planet is smashed to pieces. Let’s call this just-born planet Smithereens. It was likely smaller than Illo since it exited later (indicating it had a smaller iron-heart so that it was able to remain in the Parent Vortex longer); the relative sizes are not currently known.

Initially when Smithereens exited the Vortex, it moved out radially – from being closer to the center [cyclone-separator motion]. When it crashed into Illo, it acted like a cue ball in billiards, knocking Illo out of its orbit. Illo’s moons, ice and the debris from the crash went flying away from the collision location. Illo’s shattered ice and outer-atmosphere lighter debris traveled outward to get trapped in Saturn’s gravitational field. Gas and ice that Saturn did not trap continued outward and were trapped by Uranus and Neptune. All three have a banded appearance due to the gaseous debris separating due to the planet’s spin and gravity. All three also have ring systems. Neptune looks like it may have had a glancing blow from Pluto, or another of Illo’s moons, on its way to the Kuiper Belt (where matter is gravitationally trapped by the mass of the Parent Vortex/Sun). The image resolution is not great enough to show Neptune’s rings
Credit: NASA – Hubble (above), Voyager 2 (below)

Other, heavier, debris is caught in the gravitational field of Jupiter; some of it also forms the Greek and Trojan asteroid fields. The great mass of Jupiter attracted Illo as Illo traveled away from the crash site. Illo hit Jupiter depositing cherry-red sulfur (S3 allotrope) before rebounding to become Jupiter’s moon Io (Jupiter and Io are shown below). Illo’s heavier atmosphere, it’s ocean (mostly ammonia) and crust material were also deposited on top of the ice layer of Jupiter. The momentum of Illo (and its material) led to this gaseous debris having continued momentum as it slid (and continues to slide) around the icy surface of Jupiter. The friction of certain constituents of the outer debris causes heat that for certain locations of Jupiter’s surface, as the Juno probe has been observed and is shown in the infrared image below.

Jupiter in infrared, side opposite its red spot

Some of the rocky debris from the crash became moons of Saturn, Jupiter, and Mars. These debris-origin moons can be distinguished by their shape; they are not spherical. Images of Mars’ moons Phobos and Deimos are shown below, followed by Saturn’s moon Pandora.

Bits of Smithereens form the big asteroid belt between Mars and Jupiter. The idea that the Asteroid Belt came from a broken up planet has been discredited in recent times by several factors; however, the reasoning does not hold for features of the Killer Crash as is explained in this blog post.

Smithereens moon, Ceres was left behind in the Asteroid Belt, while the majority of Smithereens broke into large pieces that rebounded back towards the Parent Vortex. These huge pieces of planet did damage along the way as they rebounded towards the center of the system. We can see a big scar on the surface of Mars. Venus was knocked over, upside down. One large piece reentered the Parent Vortex and gravitationally coupled with the Earth’s protoplanet, later becoming Earth’s moon.

Configuration of the Inner Solar System and position of The Crash

The inner solar system image is based on data found in the en:JPL DE-405 ephemeris, and the en:Minor Planet Center database of asteroids (etc) published 2006 Jul 6

Damage to the Crust of Mars

Chunk of Smithereens Returned to the Parent Vortex

Remnant of Smithereens comes to rest near Earth’s protoplanet

This collision of Illo and Smithereens is called the Killer Crash, since it basically killed two planets.

Neptune, Uranus, Saturn, Jupiter, Mars and Venus exhibit effects from the Killer Crash, which lets us know that they were present at the time of the Crash. Earth exited the Parent Vortex after the Killer Crash. It is closest to the ecliptic; actually, the plane of Earth’s orbit defines the ecliptic, and Earth’s magnetic field is oppositely aligned to the Sun’s.

Most likely, the larger objects in the Kuiper Belt (with a mass density greater than 1.1 gram per cubic centimeter) are from the Killer Crash. Pluto and Charon circle each other, keeping the same side facing each other – no internal spin. This behavior indicates that they were originally moons. Eris could be a moon of Venus, since there is indication of parabola motion due to a splash-down in the Kuiper Belt. This infers that Eris passed over something with mass after it was launched away from the ecliptic. [Venus exited the Parent Vortex early enough that it could have had a moon.] Makemake has a spin of 7.77 hrs. It has an ice layer and an orbital inclination of 29 degrees. Intrinsic spin indicates that it was a piece of Smithereens.